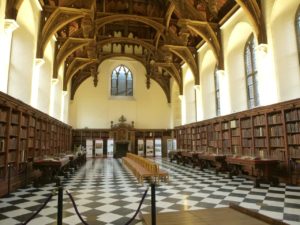 ONE AFTERNOON IN LAMBETH

On Monday 11 September 2017 a small group of CLIS members visited the library of Lambeth Palace for a guided tour hosted by our member Sarah Etheridge who works in the library as an Assistant Librarian.

After an enjoyable lunch in the newly-built restaurant in the adjacent Garden Museum we were ready to begin our tour and to meet some of the library’s staff who told us about their work.

Situated near the banks of the River Thames, Lambeth Palace has been the London home of the Archbishops of Canterbury for nearly eight hundred years. The Lambeth Palace Library was founded in 1610 by Archbishop Bancroft, who bequeathed his personal collection of books and manuscripts to form the nucleus of a free public library.  This emphasis o 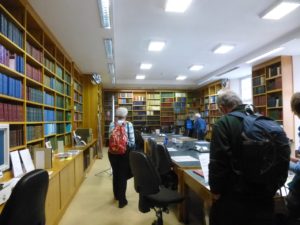 n free access has been maintained down to the present day and the collection is readily available to members of the public although visitors have to provide two forms of identification before being granted readers’ tickets.

The Library has expanded over the years, with early support from King James I (who described the collection as a “monument of fame”) and Archbishop Abbot. It now contains some five thousand manuscripts including more than six hundred medieval manuscripts dating from the ninth century.  There are over 200,000 printed books in the collection, including some 30,000 titles printed before 1700, and large quantities of archival material.

Lambeth Palace was confiscated during the Civil War and Commonwealth era, and many of the books were sent to Cambridge, but the collection was returned after the Restoration.

Some materials were acquired from monastic libraries, after the dissolution of the monasteries, and much more recently, in the 1990s, the library absorbed the collections of the former Sion College. Other acquisitions have included the Fulham Papers of the Bishops of London, and the archives of the Mothers’ Union.  Work has recently begun on the indexing of papers from the late Archbishop Robert Runcie.

The Library holds many items of interest, among them a pamphlet on indulgences owned by King Henry VIII and addressed to Catherine of Aragon, Queen Elizabeth I’s prayer book, and Archbishop Fisher’s service book from the coronation of Queen Elizabeth II. There is a manuscript draft of the Epistles from the King James Bible and the only surviving copy of the death warrant for Mary Queen of Scots.

There was something of a scandal in the 1970s when large numbers of books were found to be missing from the library, but many of these were recovered when the thief died in 2011.

Our afternoon tour took in the Marton Tower which provides room for storage, an archivist’s office, and a conservation studio.  We also visited the Great Hall which, at the time, was housing an exhibition to mark the five hundredth anniversary of Martin Luther and the Protestant Reformation.

Despite the impressive surroundings, the library accommodation is no longer considered to be adequate for current needs, and plans are underway for a new library building to be built in the grounds of Lambeth Palace. This will incorporate the main library along with a separate collection of Church of England records, currently housed in Bermondsey. This is expected to be completed in 2020.

Having completed our tour of the library Sarah took us on a brief tour of the wider palace though our exploration of the grounds had to be cut short by the onslaught of rain. We were, at least, able to see the site where the new building is to be erected.

Our thanks are due to Sarah and her colleagues for an enjoyable and informative afternoon.  Lambeth Palace is located in Lambeth Palace Road, London, SE1 7JU, and you can find more information about the Library at www.lambethpalacelibrary.org