A group of CLIS members plus guests gathered in the comfortable surroundings of UCCF’s headquarters in Blue Boar House in the centre of Oxford for the Annual Conference.

We began as usual with a brief time of worship led by Richard Waller, CLIS President, which included a reading of Psalm 96 and a passage from the first chapter of Hebrews; two well-loved hymns (Immortal, invisible, God only wise and Christ is made the sure foundation) were sung to a digitised accompaniment.

This was followed by the Annual General Meeting (see the separate Minutes).

The first speaker was Manoj Raithatha, who amongst other responsibilities runs the publishing house Instant Apostle. The first thing he said was that when he sat down to prepare this talk he felt he should talk not about publishing but about ‘Vision’ – how we see our role in God’s over-arching plan for his world – so that was the theme of his talk.

What is the purpose of our lives? Taking passages in St. Paul’s Letters to the Ephesians and to the Colossians, Manoj spoke about our identity as God’s beloved children, and our need to respond by pursuing holiness and reflecting God’s love to others.

A second theme of the talk was working for unity between God and his creation. When Christians work together, they become very effective at bringing people into God’s family, thus carrying out the Great Commission found at the end of St. Matthew’s Gospel. And together we should be working to become a holy temple, God’s dwelling-place on earth.

Turning to his work with Instant Apostle, Manoj described the genesis of the publishing house and his gratitude for the support of Lion Hudson. Because Instant Apostle is small, the staff can be nimble on their feet and get books published within months. They’ve never needed to search for books to publish and are now exporting publishing rights to Europe.  Christian fiction isn’t easy to sell in the UK, but it has become the core of their output and seems to be bought by non-Christians as well as Christians.

In reply to a query about the name from one of his listeners, Manoj replied that Bridget Adams, who’d encouraged him to set up the publishing house, had found the name in an answer to prayer.

After a bounteous buffet lunch, Nigel Crook gave the afternoon talk, illustrated with slides and short video clips (and a robot!). Nigel researches artificial intelligence and robotics at Oxford Brookes University and is also an active Christian, so his talk dealt with the possibilities of developing robots with moral competence.

As robots come to look more and more like humans (and amazing human likenesses can be achieved), the more we may expect them to act like humans with their own set of morals, especially when they are embedded in society. The science of artificial intelligence has brought into being a whole new field of ethics.

Humans develop their ethos through training and experience (Christians would also acknowledge the action of the Holy Spirit). But how does that translate into training a robot? Who would it learn from? Who’s setting the standard? Would one encode a set of rules within a robot, or teach it to learn by experience?

Can robots become moral agents? Nigel thinks not, because the heart, will and spirit are unique to humans. If a robot isn’t free to choose, it can’t be a moral agent, and morals can’t be ‘bolted on’. Nigel concluded that full moral agency isn’t possible in robots, however sophisticated. Ultimately, it is the humans who have developed them who must be held accountable.

He’d brought along a small human-shaped robot, which was then persuaded to give us a Tai Chi demonstration to music!

There was some lively discussion afterwards:

Can artificial intelligence be used as a weapon?  Yes – the autonomous weapon is an example, and someone in the audience added that the Royal Navy is already experimenting.

Could robots be used to fake miracles?  Materialists may believe that humans can be replicated.

Artificial intelligence, like many other things, can be exceptionally helpful, but also have great potential for evil.

If only professionals were doing the coding, would this result in a single world-view?

At the end of the Conference Robert Foster, Chair of CLIS, gave the vote of thanks to the two speakers and to the many people who’d done so much work to make the day a success.

Diana Guthrie, MA, serves as Treasurer on the Executive Committee of Christians in Library and Information Services.

A warm autumn day in Cambridge saw a group of CLIS members and friends gather at the University Library to be warmly greeted by Dr Onesimus Ngunga, Librarian of the Bible Society (BS) Library. Onesimus gave us a brief history of BS: inspired by the story of Mary Jones and her desire to read the bible in her own language, it was founded in 1804 with the dual purpose of translating and distributing scriptures affordably in local languages. The library collection (now over 39,000 vols) was mostly acquired through various donations, and now they receive first editions of all new English Bibles. The collection was moved to Cambridge following BS’s move from London to Swindon. 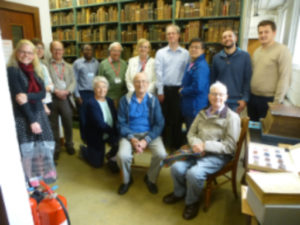 Onesimus had on display for us some rare and precious Bibles:
One of the first printed Gutenberg New Testaments (1516),
Luther’s German NT translation (1522),
Tyndale’s English NT,
a King James Bible (1611),
the first printed Chinese NT (1810),
a Dutch/Malay Bible (1651),
a Madagascar Bible (1835) preserved during persecution by burial wrapped in animal skins – this emphasised what treasured possessions these Bibles were (and still are to the many still suffering persecution) – while we can take them for granted.
We also saw a collection of Scripture portions given to the armed services in various wards [collected by CLIS member Rachel Johnson’s father].
Their largest Bible, an illustrated folio used in telling Bible stories.
A collection of miniature Bibles, some in cases incorporating magnifying glasses!

The largest collection of Chinese Bibles in the world
Manuscripts: more than 500 in 184 languages, the oldest is 4c. Coptic.
Thousands of letters from missionaries (such as David Livingstone) recording their translation work.
“Language files” about the work of translation, including the difficulties of finding appropriate words in cultures very different from the 1st century Near East.

Visiting overseas students are immensely grateful to the pioneer missionaries/translators who went overseas enduring incredibly difficult situations to provide scriptures in local languages. The annual reports are a goldmine for their research, containing details of all the translation work. Several current legal disputes have been resolved through use of the library’s records.
There is currently a scanning project to digitise Chinese Bibles and missionary letters. (See Christian Librarian Spring 2018 for details of this project and how you can help).
90% of the library’s holdings are now catalogued in electronic format.
Preservation work is carried out in conjunction with the conservation department at the University Library.

We are most grateful to Dr Ngunga for showing us the collection and sharing with us his gratitude and enthusiasm for those early pioneers of Bible translation – from Tyndale to the present day. There are still 5,000 languages worldwide with no Bible!

Thanks also to Rachel Johnson for organising this visit.

For further information about the library, see the website http://www.lib.cam.ac.uk/collections/departments/bible-societys-library

“DEMOS carried out research over the summer of 2018 to assess the potential impact of reading on several great challenges of our time: loneliness, mental health problems, dementia and social (im)mobility… In a worst case scenario, the social, political and financial pressures of these challenges will pit the young against the old, the privileged against the disadvantaged and the healthy against the ill. This report shows that books can bring us back together in surprising ways. Of course, reading is no panacea. But upon review of the evidence, there is simply no excuse to not take reading seriously as part of the solution.”

Those of us who have ever been involved with public libraries professionally know the above to be true and libraries offer so much more than books and reading: PC access, assistance with information literacy and online forms, a free and neutral civic space, homework and research help, rhyme time and reading for energetic or shy toddlers, someone to talk to whatever your age or needs.  Sadly, the long-term good that public libraries do is having to be weighed by our local authorities against the short-term legal necessity of bringing in a balanced budget while managing the immediate acute social care and child protection needs of their population.

This petition: https://petition.parliament.uk/petitions/228742 calls on parliament to be honest about the strain they are putting on local authorities.  It calls on the government to invest directly in our public libraries, with additional funding that is ring-fenced.  I use the word ‘invest’ deliberately as that is what it is, an investment that in the longer term saves society money as well as improving the health and mental health, academic and employment prospects and pleasure in life of countless citizens.