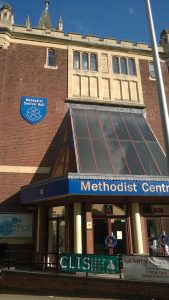 in the Methodist Central Hall, Coventry

For some of us, the day’s activities began with a morning tour of Coventry Cathedral. Our guide led us first to the area west of the new building to give us an idea of where the original buildings (a monastery) had stood; we then moved into the atmospheric ruins of the old Cathedral and learnt something about its original incarnation as the parish church of Coventry, before its elevation to Cathedral status in 1918. The guide gave us a brief insight into the firestorm that engulfed the Cathedral building in November 1940 (although the western tower remained and still remains standing) and told us about some of the people who were key in ensuring that morale in the city remained undented. The story is well known of the Cathedral stonemason who saw 2 wooden beams lying at right angles to one another in the rubble and bound them together to form a cross which was put up in front of the ruins of the east window (that cross has now been placed within the new Cathedral, whilst a replica stands in its original position). 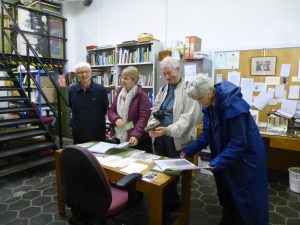 We then moved into the new Cathedral, designed by Sir Basil Spence (his was the only design that retained the ruins of the old building). It is a stunning building, very 1950s in design and full of wonderful works of art. It must have astonished people when it was first opened in 1962, and indeed some elements such as Graham Sutherland’s ‘Christ in Glory’ tapestry behind the high altar caused much controversy at the time. Especially noteworthy are the windows – the wonderful colours of those in the side walls, and the spectacular south wall of glass, the ‘Screen of Saints and Angels’.

Last of all, we shed the extra people that our group had attracted and were taken down into the archives to meet the archivist, who had got out for us some of the original drawings of the old and new Cathedral buildings; we also got to handle the heavy hammer that had belonged to the Cathedral stonemason. All in all, a wonderful visit to Coventry Cathedral.

Our group then dashed over to the Methodist Central Hall to join others for a sandwich lunch. 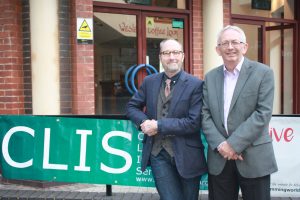 lling us in on some background to the Reformation, which wasn’t the first attempt to reform Western Christendom, but succeeded mainly because of one vital factor: the advent of printing.

In the mid-15th century Johannes Gutenberg introduced printing to Europe – this was an enormous development (akin to the development of the internet today), as it meant that books were no longer the prerogative of the very wealthy – until then the written word had been laboriously copied out by hand on vellum or parchment, usually in monasteries; this produced some marvellous works, such as the Lindisfarne Gospels, but restricted literacy and therefore political power to the extremely wealthy and the church. Gutenberg combined movable type, the printing press and oil-based ink, thus enabling the mass production of text.

He printed two Bibles, but they retained the format of their written predecessors, as he wanted to show that printing could match the quality of manuscript. However, this standard of printing was still beyond the reach of all but the very rich, and what most people wanted was something less handcrafted and cheaper. Other printers were quick to take up his invention but started to use paper, a much cheaper and more accessible alternative to vellum and parchment. By 1500 there were about 1000 printing presses in Europe.

This was a disruptive technology. At first most publications were in Latin, but this soon changed, as short publications in the vernacular became economically profitable; pamphlets were cheap to print and buy, so new ideas could be spread very rapidly and learning decentralised. Intellectual wealth gained importance, and boundaries between disciplines became porous. Publishers such as Aldus Manutius became centres of discussion, and their names began to appear on the title pages of books. There were risks in publishing controversial ideas, but also great financial rewards.

Art had a great influence on the Reformation. About 1500 there was great popular interest in the Apocalypse, and Albrecht Dürer was one of the people who capitalised on this; commercially astute and with his own printing works, he created an illustrated version of the Book of Revelation and sold it direct to the public.

The mediaeval church knew the power of images in a predominantly illiterate world – they formed the decoration in most churches – and up to this point the church had been able to control them. But as cheap prints now became affordable for many more people (portraits of the reformers were especially popular), the authorities became concerned that they were losing control of what people were reading. Women were deemed especially susceptible to disruptive ideas, and as a consequence moves were made to restrict literacy to men.

By 1517, when Luther allegedly pinned his Ninety-Five Theses to the door of the church in Wittenberg (there is no reliable evidence for this incident!), political and social changes were preparing the ground for reform. When a printer got hold of the Theses, translated them from Latin into German and published them, the publication ‘went viral’. Luther later wished he’d written the Theses in more populist language. His (partial) translation of the Bible used a more ac 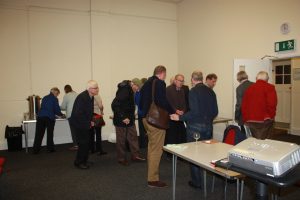 cessible form of German which did a lot to standardise the language. His various pamphlets sold about two million copies.

He called on the rulers of Europe to cleanse the church of its endemic corruption; he knew the value of controversy, and that the only thing that would silence a publication was a lack of readers. He wrote hymns and the words to popular melodies, all part of spreading the message. He wanted ‘God invited to sit round the family table’.

He wasn’t above using invective and sensationalism. Political cartoons emerged and flourished during the Reformation (Nick showed some entertaining slides of these), and Luther used illustrations to get his message across to those without a tradition of literacy. The church’s attempts to silence Luther and other radicals became pointless, as banning created demand.

Could the Reformation have happened without the advent of printing? Probably not. Printing showed that the most dangerous thing in the world is the idea. Unfortunately Luther’s later years were clouded by ill-health, bitterness and some unpleasant ideas. But he remains a hero for Nick, as he stood up for the individual and opened people’s minds to new ideas about their faith. Writers, publishers, booksellers and librarians have inherited this responsibility, offering people the opportunity to learn and think in a fresh way.

Luther didn’t like the Book of Revelation, because he didn’t understand it. But when somebody pointed out that much of it was about the pope, he looked at it anew.

In reply to a question about book-burning, Nick commented that one of the books that the Roman Catholic Church tried to burn was Foxe’s Book of Martyrs, which became a best-seller, in great part due to its lurid illustrations. 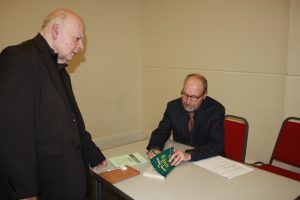 ed about his book Revelation Road, Nick replied that he’d wanted to write on Revelation for the common man; Nick believes it is a book with great relevance for today.

A member of the audience commented that it was becoming rare to hear a sermon about ‘justification by faith’; Nick replied that Luther did tend to overstate things in order to win an argument, and perhaps people were now feeling there’d been a lack of emphasis on works.

Another listener pointed out that Luther’s Ninety-Five Theses are rather a disappointment, as if he hadn’t fully worked out his theology. Nick replied that the theses don’t include ‘justification by faith’, but at the Disputation of Leipzig in 1519 he made his position much clearer and was soon branded a heretic.