CLIS Visit to The Kilns in Oxford

In October 2018 CLIS Members visited Oxford and were given a guided tour of C.S Lewis’ house The Kilns. In 1930 C.S. Lewis bought The Kilns jointly with his brother Warnie, and Mrs Janie Moore. 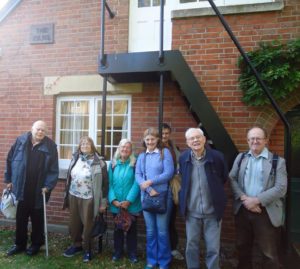 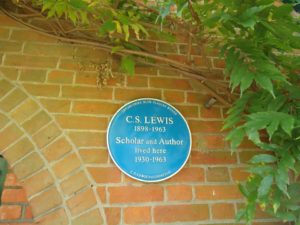 Lois Cooper writes: Ever since some of my family moved to Oxford area I have wanted to visit “The Kilns”, Home of CS Lewis, where he wrote many of his books. I was very pleased when the “Christians in Library and Information Services” arranged a group visit. It gave me a chance to visit family, and avoid a day trip from the Isle of Wight.
Conveniently there was an exhibition “Tolkien – Maker of Middle Earth” at Weston Library, so went there as well, having to dodge the cameras of tourists around Oxford! A confession here is that even though I read The Hobbit, I started reading “The Lord of the Rings” and felt I had better things to do with my time! I did watch the recent films as they came out in January, and January is a bleak month to celebrate one’s birthday. The exhibition was busy and I did find it interesting.
The following day met up with the Library group at The Kilns. CS Lewis wanted a remote location because of his unusual family relationships. Mrs Moore was the owner of the home, Lewis and Warnie were the tenants. They also had a pessimistic gardener living with them, whom it is said that Lewis modelled Marsh-wiggle after in the Silver Chair, written at The Kilns. It is a quirky 1922 home, quite dark rooms, built on the site of two kilns. They lived there 1930 to 1963. In fact the lightest room was CS Lewis bedroom but would have been the coldest too with two outside walls! He kept the door locked between him and Mrs. Moore and had stairs to the ground outside, so it would look right!
We were given a tour of the house and a brief history of his time there. The first room we went to was where CS Lewis received visitors. Blanket was used for the curtains (the original ones fell apart!), walls were nicotine stained and ash was put on the carpet to keep the moths away. We went through several downstairs bedrooms to a library. When he died there were 5,000 books in the house. Some were going up the stairs (I felt good about that as I have books going up the stairs!)The library was called “The Grudge”, a copy of the rooms at Merton College. He wasn’t allowed to have his unusual family with him and his fellow lecturers found Narnia embarrassing. They weren’t detective novels, which was considered ok! The group showed interest in a painting – The Bird and Baby Sign, where the inklings met. It is now “The Eagle and child”. The piano was there where Maureen (Mrs Moore’s daughter) had lessons.
Warnies rooms were where he could escape from the women of the house. There were various photographs of CS Lewis and the family in the rooms. At the top of the steep stairs in the attic there was a model of Narnia –snow covered trees and the lamp post which was tastefully done. Finally we finished in the kitchen and then the dining room. There was alot of land with the house but this was sold for houses, and the lake (a disused quarry) and site of the underground bunker has been made into a nature reserve. We visited this afterwards.
Our next stop was Holy Trinity Church where CS Lewis worshipped for over thirty years. He didn’t like staying behind and talking to people, the same with his lectures! We were shown the graves of CS Lewis and Mrs Moore. Then went into the church to view the window which has been etched with scenes of Narnia, in memory of a couple of local children who died young. The window changes as the light shines through it. Aslan the Lion is shown as a sun, emphasising the lion as a Christ-like figure radiating light and life. The word Narnia appears amongst the rays of light coming from his mane, emphasising Aslan’s role as life giver to Narnia. It features the Castle Cair Paravel, Fledge, the magic apple tree, a talking tree and other animals. I thought it was tastefully done.